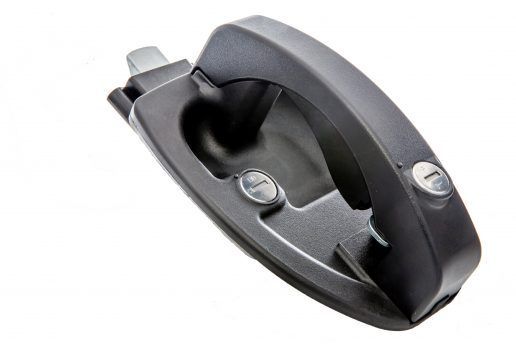 A new development in door handles from Bauer Products aims to make getting in and out of an RV as effortless as possible.

The Bauer “squeeze latch” will hit markets in the near future as an alternative to traditional grab-and-twist door handles and latches. Bruce Bacon, president of engineering and co-owner of the locks and latches maker, said he designed the new product thinking of his wife, who has Rheumatoid arthritis.

“This is going to make her life much better,” Bacon said.

Instead of users gripping and twisting a door handle, the squeeze latch functions more like a lever that requires as little wrist movement as possible.

“What we try to do is promote a product that is accessible for everyone and easy,” Bacon said. “Because after you’ve been around while you hear ‘I wish it was this way instead.’”

Bacon said a distributor partner reached out to him about creating a new kind of latch this past September, asking him to explore simplicity and ease of access. Bacon quickly worked up original sketches and soon had a formal product design ready.

Once he landed on the idea of a lever, Bacon said the squeeze latch just made sense.

“We were pretty much trying to think of how to make something easier to open, and a system approach where inside it’s just as easy: Push down on a lever to get out,” Bacon said.

Bauer is currently in production on the new line of latches, and the company plans to share models with its partners in the door manufacturing industry in the next few weeks. After that, Bacon said product options will open up for OEMs.

Bacon is a third-generation co-owner of Bauer, a family company that’s been around for more than 60 years. He said the standard for travel trailer doors hasn’t changed much over the years, and these new squeeze locks represent a big step forward in ease of access.

“The first time I showed the prototype to my wife she was thrilled,” Bacon said. “I put it in a little door display and she goes, ‘This is easy!’ It was a natural genesis of coming up with something, and to me, that’s exciting.”

On top of the product’s benefit for people with movement restrictions, Bacon said the squeeze latch should make opening and closing trailer doors while parked on uneven surfaces much easier.

The new latches will be stocked in the coming months, potentially starting in June. Bacon said manufacturers and distributors interested in Bauer’s new squeeze latches should contact the company at [email protected]