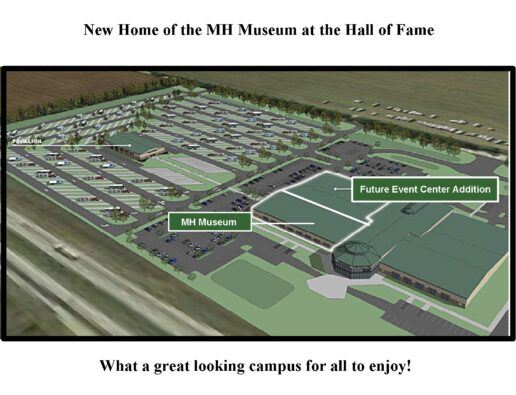 Thirty years after the RV/MH Hall of Fame and Museum’s opening, the manufactured housing industry will get its own museum space.

A 20,000-square-foot addition to the RV/MH Hall of Fame and Museum in Elkhart, Indiana, will highlight the manufactured housing industry. The project is expected to open in 2021, with vintage and modern models of manufactured housing, including a mini home, in the indoor facility.

“This was the best year, despite Covid, for not only the RV industry but the manufactured housing industry, too,” Hall of Fame President Darryl Searer said. “We feel it’s the right time to move on it while things are good and looking better for 2021 with the vaccine coming in.”

The $1.5 million project originally was going to be 15,000 square feet, Searer said, but was enlarged to fit models inside. The wing will be attached to the museum’s existing facility.

Hall of Fame attendees can expect to see memorabilia and small items from the industry’s history, originally displayed in the museum’s main building. When those items are moved to the new facility, suppliers will have the 2,500-square-foot main building space to present products year-round at permanent booths. Searer said the move will increase Hall of Fame revenue.

“As long as we get support from donors,” Searer said. “We need to have the commitment and money before we begin, so the goal is in stages.

“We just think the timing is right and the industry is going to step up like they did when [the museum] was in debt, and help us put in the new state-of-the-art museum that is something everyone can be excited about.”

Searer said he hopes to have funds raised by mid-February next year, with construction beginning mid-April. The MH Museum should be completed by August’s end, he said.

Other future plans include a new event center, which will attach to both the MH and main facilities. The addition’s details will come at a later date.

“The event center will probably go quickly, with the RV industry doing so well,” Searer said. “Several people in the industry told me that when we’re ready to build, let them know and they’ll help us build it.”

Searer said those who wish to participate in or donate to the MH Museum at the Hall of Fame should contact [email protected] or 574-903-3850.