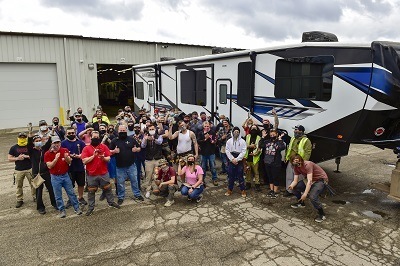 The Road Warrior toy hauler has been a Heartland RV “staple” for some time, and a recent product demand spike is driving the manufacturer to expand its production facility.

“We have gone through a refocusing of our products by looking at what retail customers were asking for on dealers’ lots,” Depositar said. “Instead of building a product we thought people wanted, we are building what we were hearing was wanted in the market.

“By doing that, we saw faster turnover on dealer lots and greater reception by the dealer body, because the product was well-positioned on the lots,” he said. “They are not overpriced. There is a lot of value you are getting from features we put on the coach.”

The company has signed numerous new dealers, with a focus on hearing what their customers desire within the aftermarket. One component in Road Warrior manufacturing, Depositar said, is featuring numerous standard features.

“We try to take a product that has so many options that it almost becomes confusing, and instead, we trim it down,” he said. “We use standard features a lot, like a standard fireplace and sound system.”

Road Warrior toy haulers also feature standard hitches and a gravity-assist door – a ramp-like patio that raises and lowers with a button. Including standard features in Heartland’s toy haulers makes it easier for dealers to stock product, Depositar said, as it “essentially comes built one way.”

The Road Warrior offerings have gotten updates since the initial launch, Depositar said, including a recently implemented 20 percent increase in fuel capacity to 50 gallons. Other new features, including floorplans, are slated to debut at the Elkhart Extravaganza starting Sept. 27.

“Looking at how we grew, a lot of features played into it,” Depositar said. “There is reignited confidence in the brand and success from the retail market and wholesale market.”