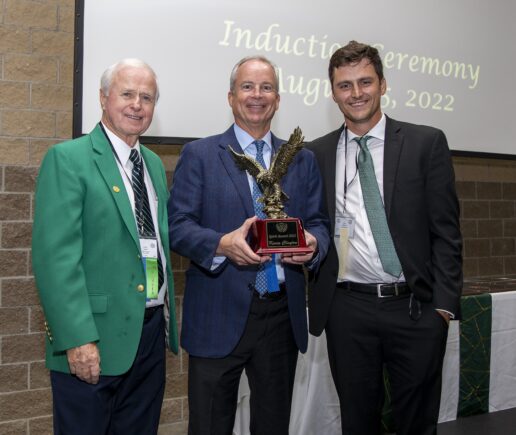 The RV/MH Hall of Fame celebrated its 50th year with a cocktail reception, dinner for 450 and induction ceremony in Elkhart, Indiana on Monday.

“It was a phenomenal evening,” said Darryl Searer, RV/MH Hall of Fame president. “Many attendees told me it was the best ever.”

The cocktail reception was preceded by a ribbon-cutting ceremony to officially open the 21,000-square-foot Scoular Manufactured Housing Museum on the northeast side of the RV/MH Hall of Fame. Among those present for the opening were Searer; Ryan Szklarek, RV/MH Heritage Foundation EVP; Jim Scoular RV/MH Hall of Fame member; and members of the Indianapolis legislature. The museum opened to the public this week.

At the dinner, guests tucked into a surf and turf feast by Navarre Hospitality. Each was given a brass coaster with a Class of ’22 50th Anniversary logo at its center as well as a wine glass inscribed in gold leaf.

Searer began the evening with a “State of the Hall” video surveying the Hall’s 50-year history in 10 minutes. At the end of the video, attendees were invited to toast the next 50 years.

“Kevin was very thrilled to win the award,” Searer said. 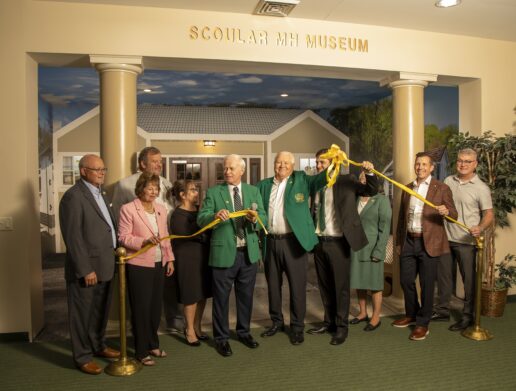 The Spirit Award recognizes the person who has made an outstanding contribution to the success of the foundation. The person displays character, commitment, dedication, involvement, positive attitude, enthusiasm and support for the Hall of Fame.

Clayton helped the organization start a $1 million campaign to raise funds for the Hall of Fame over five years. He donated the first $200.000 for that campaign which met its fundraising goal well ahead of schedule. In large part, because Clayton allowed the organization to use his name to promote the fundraising effort, Searer said.

Searer said when he and Clayton first met, it was a mutual admiration society. The two worked on fundraising together but had met only on the phone.

When they did meet in person, “I told him I want to shake hands with my hero,” Searer said. “Clayton said, ‘No, you’re my hero for completing what you said you would and six months early.’”