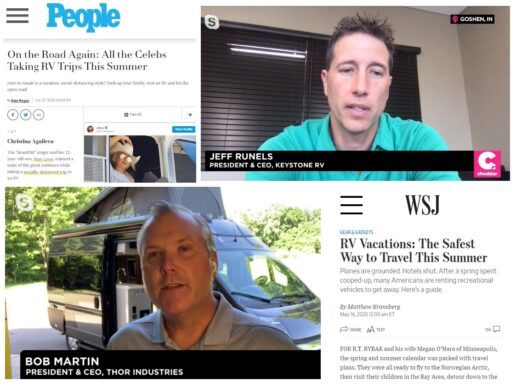 RVs have played a supporting role in American life for decades. This summer, their long overdue turn in the spotlight seems to have come. In headline after headline, news segment after news segment, RVs have ascended to a starring role in national culture. RVs’ newfound popularity owes much to the behind-the-scenes work of a dedicated crew promoting the industry and lifestyle.

“The RV Industry Association’s PR team, working in conjunction with our PR partners, has directly placed 137 news stories in the past 137 days garnering hundreds of millions of impressions,” said Monika Geraci, senior manager of marketing strategy and operations. “This, in addition to the exciting launch of Go RVing’s Go On A Real Vacation campaign, has strengthened our industry’s push to become the go-to summer travel option.”

“The press coverage we’re experiencing now may be one of the most consistent runs of positive media about the RV industry ever seen,” Geraci said. “The story of surging sales and unmatched interest from first-time RVers is reaching millions of American households across the country.”

The first successful earned media RV story occurred on March 14—right as the first lockdowns began happening. Since then, another RV story has appeared in the news thanks to RVIA/GO RVing literally every day, on average. With so much good publicity going out, it is hard for Geraci to pinpoint a favorite, though she did say she has particularly enjoyed working with new media outlet Cheddar.

“It’s a live streaming financial news network that is like CNBC or Bloomberg, but focused on a younger demographic,” Geraci said. “We were able to get both Jeff Runels from Keystone and Bob Martin of Thor Industries on the show, and we look forward to booking other members in the future.”

In the age of social distancing, many people feel traveling and camping in trailers and motorhomes is safer than flying in commercial airplanes and staying in hotels. For longtime campers, the benefits of RVing are obvious, but for many in North America, RVing has always been on periphery of their consciousness. To that end, RVIA’s marketing and Go RVing teams have made it their mission to put RVs front and center in the national conversation.

The teams collaborated to launch Go RVing’s new “Go On A Real Vacation” campaign just before the COVID-19 outbreak. When the pandemic hit, they kept a close eye on the national mood to ensure any outreach efforts were appropriate in the rapidly unfolding situation and reflected the industry’s concern for the wellbeing of their fellow citizens. However, when opportunities emerged to promote the ways the industry could be of benefit to a locked-down populace, the marketing teams went into action.

Many people who work in the RV industry have noted the uptick in RV coverage in national mainstream media, with friends and family members often mentioning they had just read an article about the rising popularity of RVs. While the future remains uncertain, RV manufacturers, suppliers and dealers—with an able PR and organizational assist from industry associations—seem to have risen to the occasion thus far.

Those in the RV industry with innovative ideas on how to keep promoting RVs in the media are encouraged to share them with Monika Geraci.