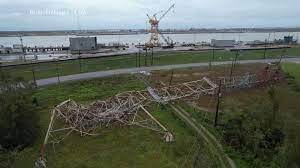 PVC is known most for its use in pipes but the material also is found in window frames, vinyl siding, doors, electric cables, flooring, canvas and bottles.

The effect on the PVC supply chain is the biggest downstream threat from disruptions relating to Hurricane Ida. The effect will not be as pronounced as the Texas winter storm that shuttered petrochemical production in the Houston/Gulf Coast region. For example, the Texas freeze shut about 70% of ethylene capacity – a feedstock for plastics and polymers. Hurricane Ida took about 16% of ethylene capacity offline.

However, PVC’s versatility in rigid and flexible forms will create downstream difficulties if production remains offline for an extended period.

Four plants are required to feed PVC production. Plants responsible for plastics, chlorine and caustic soda production were offline because of the hurricane’s damage. Caustic soda is a byproduct of chlorine production and a feedstock for the alumina used to create aluminum.

PVC demand has been strong for more than a year, driven primarily by the construction industry. Supply has been affected by Gulf Coast hurricanes last year and the Texas storm in February. S&P Global reported one source saying a major Gulf Coast storm such as Ida would be catastrophic for supply.

Power outages could be the biggest hurdle to restoring production. Entergy Group President Rod West told CNBC earlier this week that some of the 1 million Louisiana customers without power should have it restored within days. Many major petrochemical facilities in the Louisiana Gulf Coast area have backup generator power, CNBC stated. However, many smaller suppliers might not.