Lippert Pops Up with New Type B Roof 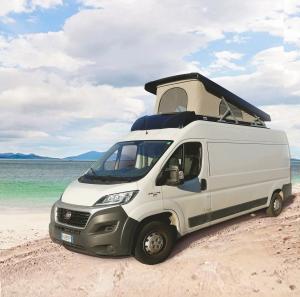 Lippert Components (LCI) has launched the Vela, a new pop-up roof system for Type B vans.
In a press release, Lippert Components said it has been following the growth trend of the camper van market in Europe and the Class-B market in North America very closely. LCI has already developed several products for Type B RVs, including slide-out applications. The Vela pop-up roof mechanism expands the “space on demand” concept upward.

“It was 2017 when we started to focus the idea of entering the market of elevating roofs,” LCI RV Europe CEO Michele Checcucci said. “At the time, there were only two producers, and the segment suggested there was room for strong growth, which subsequently has happened.”
The company sought an innovative product, Checcucci said, and took its time designing and engineering the best product possible. The Vela pop-up roof was the result of the LCI’s efforts.
Available in September, the new Vela pop-up roof, developed and produced in Europe, is sturdy but weighs 20 to 30 percent less than comparable fiberglass products, the company said. It provides an extra bedroom for camper vans and Type B RVs with a double bed measuring 79 x 51 inches.

The Vela incorporates new manufacturing techniques such as a patent-pending solution for channeling hot or cold air. It utilizes thermoformed “twin sheet” technology instead of fiberglass, the company said, offering the advantage of being easier to produce and saving on the total product weight.

“The elevating roof made with the thermoformed twin sheet technique allows us to have a much higher than average production capacity,” LCI RV Europe Sales Director Lorenzo Manni said. “With fiberglass, one mold means we can only make one unit per day, so more units per day will always equal the need for more molds. With our twin sheet technology, we can utilize a single mold and continue to increase production capacity while still producing a shape that can be successful.”

This benefits the quality of the product over time, Manni said.

The twin sheet thermoforming technology, which can use both vacuum and pressure techniques, requires each sheet to be produced separately. Once formed, the top and bottom sheets are quickly joined together, so not to lose surface temperature, and then blocked. The space that remains between the two sheets has high pressure air introduced to it which strengthens and welds the two parts. The end result is a more robust and lighter product, which weighs 20 to 30 percent less than similar fiberglass products while still yielding a larger overall product.

The Vela pop-up roof uses the thermoformed twin sheet technique in both the upper and lower shell. Having the cavity in the base as well has made it possible for LCI to propose an exclusive and patent pending solution to push hot or cold air into that space, depending on the climate outside. This improves the air in the upper room and gives it a temperature more similar to that of the interior of the camper van below it.

The new product is aesthetically pleasing and functional, Checcucci said.

“The objective all along was to design a product that was not just a simple extension of the campervan, but a real, livable bedroom with perimeter lights, reading lights, sockets for charging smartphones and air vents,” Checcucci said. “I believe, through much testing and patience, we have arrived at the most innovative product in a very fast-growing market.”