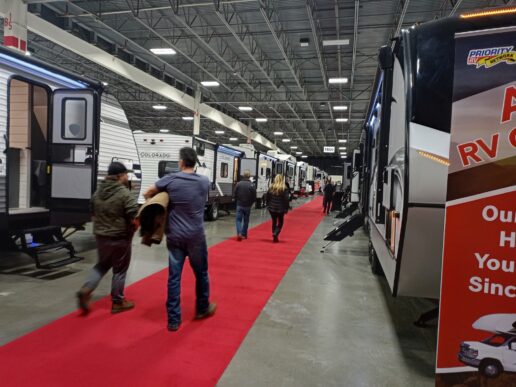 The 56th Annual Detroit RV and Camping Show drew over 27,000 people to the Detroit Suburban Collective Showplace from Feb. 2-6 — the third-largest crowd recorded by the Michigan Association of Recreation Vehicles and Campgrounds (MARVAC) in over 20 years.

Darren Ing, MARVAC director and events coordinator, said the association is pleased with the attendance, in addition to the variety of attendees. The Detroit RV and Camping Show was canceled in 2021 due to the ongoing Covid pandemic, so there was not data from the year before to speak to the current trends in RVing and camping.

“The attendance speaks to a fact that there are a lot of people who are veterans of the lifestyle who are glad to be back and see what is new in RVs and camping,” Ing said. “From a national standpoint, we have seen that there is a lot of new interest from people who are new, who want to know what RVing and camping are all about. So overall, this year’s attendance speaks to an increase of people interested in the lifestyle, who want to come out and see what is new.”

Ing said many attendees went to learn about camping, RVing, Michigan campgrounds and other general information from vendors. Visitors also attended the educational seminars scheduled throughout the show. Seminar topics ranged from intro-to-camping information, like campground etiquette, to best practices for towing and hitching.

However, the show was not just for viewing, and Ing said vendors ranging from the largest fifth wheels to parts and accessories were pleased with their sales volumes during the show.

“Dealers reported being very happy from an attendance and sales perspective in what they were able to achieve,” Ing said. “All of our exhibitors, from campground owners to parts and accessories, said they were very happy with the traffic. They felt they were able to have good contact with those attendees, as well.”

Ing noted Michigan is considered an RV destination site. He said the state, like many others, have seen a significant uptick in campground reservations.

“Based on the people coming through the door there is a high demand for RVing and the camping lifestyle,” Ing said, noting RVIA data citing Michigan as one of the top five states for RV shipments for 2021. “To be a northern state in the top five really speaks to the interest in the lifestyle here in Michigan.”